About the Invasive Species Network 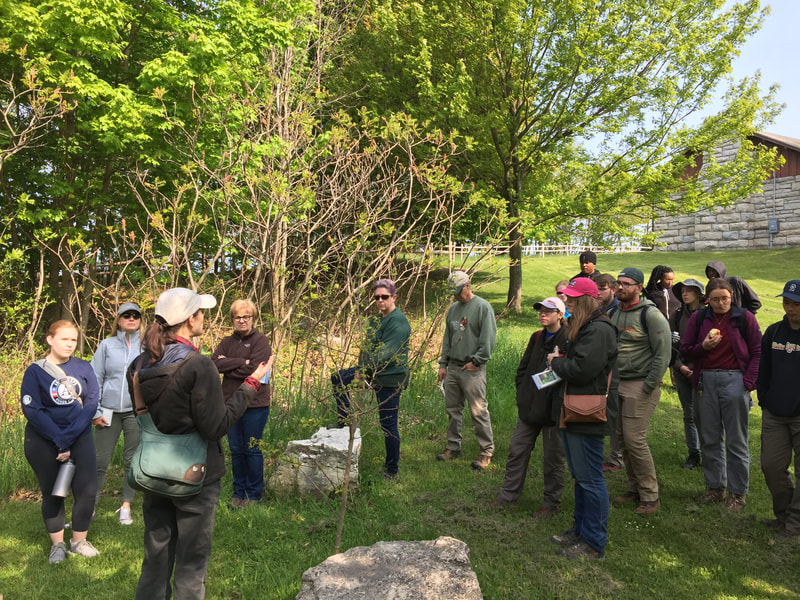 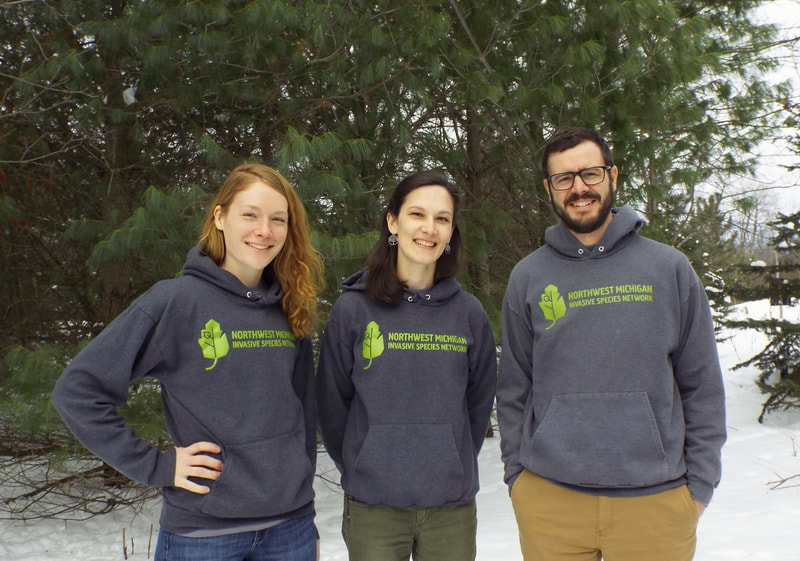 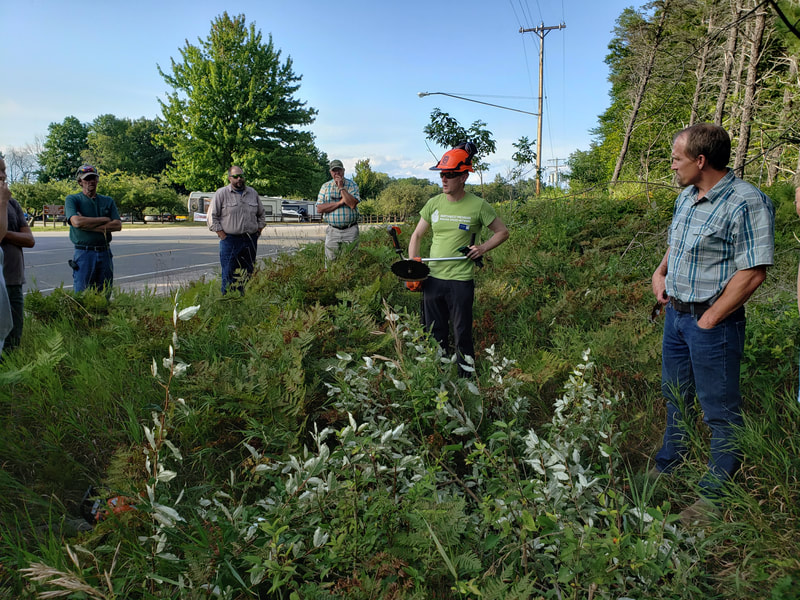 What is ISN?
ISN is the Northwest Michigan Invasive Species Network, a "Cooperative Weed Management Area (CWMA)" or "Cooperative Invasive Species Management Area (CISMA)"
Where does isn work?
ISN collaborates with partners all over the Great Lakes region, but has a service area of Benzie, Grand Traverse, Leelanau, and Manistee Counties.
Who does ISN work with
ISN is a group of nearly 40 partner organizations at the local, state, and regional level. We also work with private citizens to answer questions, serve as a resource, and occasionally treat high-priority invasive species on their property
How does ISn pay the bills?
ISN is entirely grant funded. We are currently operating under grants from the Michigan Invasive Species Grant Program (MISGP) from the State of Michigan, and the Great Lakes Restoration Initiative (GLRI) through the EPA and US Forest Service
What does isn do?
Our mission is to protect, enhance, and promote northwest Michigan's natural communities through terrestrial invasive plant management and outreach. ISN is essentially a "think tank" of anyone working with terrestrial invasive plants (and some wetland invaders). ISN shares information, expertise, and resources among partners. We work to educate the public about invasive species and prevent new invasions through workbees, presentations, and Go Beyond Beauty. ISN also works to control high-priority invasive plants in our 4 county service area as funding is available
What is habitat matters?
“Habitat Matters” is the mantra of why we do the work we do! We know the habitats of northwest lower Michigan matter for people (recreation, hunting, sheer enjoyment, etc.), wildlife (animals rely on having the right resources and relationships with other organisms to survive), and northwest Michigan (for tourism, forestry, fisheries, and agriculture).  Because invasive species pose a major threat to our native habitats, ISN works to reduce that risk to allow our unique habitats to continue to thrive
What is Go Beyond Beauty?
Go Beyond Beauty is a voluntary program partnering ISN with local gardening professionals to reduce the introduction of high-priority invasive ornamental plants by removing them from sales. As approximately 50% of invasive plants arrived through horticulture, these businesses promising not to sell the plants that do the most harm to our habitats makes a huge difference, and demonstrates a strong commitment to stewardship of our natural areas.
How does ISN Choose what to work on?
In 2010, ISN partners completed a careful prioritization process to choose which invasive plants would be the highest priority in northwest lower Michigan. This resulted in the creation of the “Top 20 Least Wanted” species.  From this list, 4 species were identified as the most detrimental, and early enough in their invasion in the region to allow control efforts to be most effective:  invasive Phragmites, garlic mustard, Japanese knotweed, and Oriental bittersweet.  Additionally, species that are invasive elsewhere that have not yet arrived in northwest lower Michigan are determined “Early Detection/Rapid Response (ED/RR)” species; ISN is constantly on the lookout for them and prioritizes them very highly, as we have a high likelihood of success in eradication, not just control, when species are caught early.  ISN’s priorities are revisited each year to ensure the best choices are made.
I think i found an invasive plant. what do i do?
First, make sure it is an invasive species; use the Field Identification Guide to Invasive Plants in Michigan’s Natural Communities or the Midwest Invasive Species Information Network (MISIN)’s app or website.  If you confirm its identification, report it to MISIN.  If it is an ED/RR species for northwest Michigan, or one of the 4 top plants, contact ISN with the species, location, and approximate size of the population.
​
Where/what does isn treat?
When funding allows, ISN will give first priority to treatment of known ED/RR species. Then other high-priority species located in high quality habitats are targeted for control.  Special consideration is given to “satellite” populations, as they are easier to control than large source populations (especially preventing them from turning into source populations themselves!).  ISN works on public and private lands in accordance with these guidelines.
Can I work with ISN to remove invasive species?
Absolutely! ISN hosts a public garlic mustard workbee in each of our four counties every spring.  We also assist with other workbees throughout the service area as they present themselves.  Time and funding permitting, we hope to add autumn woody invasives workbees to our roster as well.  You can see what ISN and our partners are up to on our events page, and check for open positions with ISN and our partners.
Will isn treat invasives on my property?
If your property has a population of invasive plants that fall into the criteria detailed above, ISN may (funding permitting) choose to treat the plants or do a cost-share treatment. Treatments are focused on high-quality habitats, which often rules out properties in northwest lower Michigan’s cities, towns and municipalities.  However, you never know until you ask!  At the very least, ISN can give you recommendations on how to control the plants yourself or help you connect with experienced professionals in the region, including connecting you to resources that may help, such as Natural Resources Conservation Service (NRCS) programs that offer cost-share to landowners.
​Does isn use herbicide to control invasives?
In short, sometimes. ISN uses the Best Management Practices for each of the species it works to control in each habitat.  Sometimes it is most effective and least environmentally detrimental to use chemical agents (as with using herbicides to control Japanese knotweed), sometimes biological controls work best (as with using Cella beetles for purple loosestrife), and sometimes mechanical control is the best practice (as with handpulling small to medium populations of garlic mustard).  No one solution is best for every species or every situation.  When using herbicides, ISN is careful to select the product that will be most effective with the least impact on non-target species and systems.

In addition to chemical treatment, ISN uses education and prevention to stop invasions before they start. Look for bootbrush stations at trailheads especially, but ISN presentations include lots of ideas for preventing invasion, including cleaning oneself, one’s pets, and one’s gear, identification of new invaders, and not introducing new plants, especially plants known to be invasive elsewhere.

By donating to the Northwest Michigan Invasive Species Network, you are supporting environmental stewardship ​in your community, and taking an active role in
​protecting habitat in northern Michigan.
Donate
Pleasant Peninsula Design, Habitat Matters 2017